“The man who has a conscience suffers whilst acknowledging his sin. That is his punishment.” ― Fyodor Dostoyevsky, Crime and Punishment 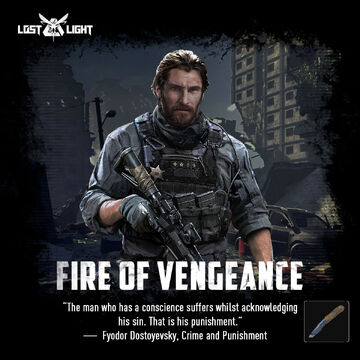 After receiving the memory shard, Judas retrieved some memories. He used to own happiness. Even though the world crumbled, he possessed the most precious treasure. But one day, the criminals carried off his wife and children. Then he vowed to punish the guilty, which is the starting point of Judas' Revenge.

Judas was once a member of S.W.A.T, protecting the city and punishing criminals. To punish the guilty, he performed as a lyncher, using cruel torture to tell Marauders what is law and morality. At first, lynch would excite him, as if life has meaning by putting such punishments on criminals, and as if the exclusion zone could be saved.

Judas once had a dream: his wife was standing in the center of the square near the fountain, she was wearing a blue dress, but her face was not visible. He tried to go up to her to hug, but she was frightened. In a moment, her figure disappeared in the distance, and he couldn't catch up with her, no matter how he tried. He lost all his beloved, standing alone in the midst of the flames.

Judas remembered that his wife passed away in the Windswept Hospital, as if it were yesterday. His wife used to talk about the garden outside their house. She missed the unearthly beautiful rouses when she was under hospitalization. It was a pity that even the most beautiful roses ever die. Placing a bouquet of roses in Windswept Harbor seems like Judas’ final chance of getting forgiveness.

Lay the broken knife at Windswept Harbor, where his hatred begins. The past... for modern people is not always associated with happy memories. Looking into the abyss, a moment passes, and suddenly the abyss is already looking at you. So, gradually, the punisher turns into a villain. The best way to find salvation is to become who you once were. Place a bouquet of flowers at Windswept Harbor where his hatred ends.

Community content is available under CC-BY-SA unless otherwise noted.
Advertisement